FEEL FREE TO ASK US

What is Corona Treatment?

Corona (Latin, ‘crown’) is a type of plasma that surrounds the Sun and other celestial bodies, including the earth. The word “Corona” itself derived from the Latin, meaning crown, which in turn came from the Ancient Greek korōnē meaning “garland” or “wreath”.

Coming back to Earth, we generate the same by applying High Voltage High Frequency between a Conducting Material and Earthed Dielectric Material. The Air in between the same gets ionized and Corona Discharge takes place.

During this Process, Atmospheric Oxygen is broken down to Nascent Oxygen and Ozone.

The film that enters into the corona treater unit is oxidized by the nascent Oxygen. This ‘Treated’ film is ready for use for applications such as printing, lamination or coating.

The machine that generates this is called a Surface Oxidizing Unit or more commonly known as a Corona Treater. It is an ancillary equipment installed on Blown Film Lines, Laminators, Printing Machines and Coating Machines.

For Plastic Non Conductive Films, we have an Electrode System and a Roller covered with Dielectric Material where the Film is passed thru the system and exposed to Corona Discharge.

What data is required for effective Corona Treatment?

In order to offer the Optimum Model, the manufacturer needs to have the following information

Using the data, the Power Requirement of Generator is determined. This purely also depends on Electrode Design and Contact Time.
Power = No of Sides x Width x Line Speed x Change in Dyne Level x A/1000
Power – Kwatts.
Width – mts.
Line Speed – mts/min
A – 1 – 5 ( Depending on Material to be Treated, Slip Additives and Temp of Film.

What is Corona Treater System?

The System consists of

There are 2 Basic Types of Corona Treaters broadly classified into

Non Conductive is further classified into

The Electrode Assembly is designed as per the Substrates, Max Width and Speed. The roller diameters and electrodes are then selected to suit the process. The power requirements also depend on the application and additives.

By considering all these points, the right model is selected as per the customer’s application. We focus more on the Electrode Design rather than Generator Power as we strive to give more treatment at less power.

What is Induction Cap Sealing?

Induction sealing is a simple process by which an aluminum foil disc is sealed on the mouth of a bottle to ensure the safety of the product inside. This is done by placing the foil disc inside the cap and allowing the bottle to pass under the induction sealer after the filling and capping process. Plastic bottles are becoming the preferred choice for companies to pack their products in and induction sealing is what keeps it that way. There are many benefits such as airtight sealing, faster sealing, customer confidence and much more..

Induction Sealing is now a preferred choice of seal for all products that are packed in bottles with a cap to ensure the product safety from spillage and contamination. The induction seal is constructed such that it evenly seals the rim of the container while the container is capped and the seal is electronically heated. This ensures proper and uniform adhesion of the seal to the bottle mouth.

Now how does this keep the freshness of the product intact in the bottle?

The induction sealing process seals the container with an aluminum foil coated with a suitable polyethylene film that melts while heating and fuses with the bottle mouth upon cooling. This cooling takes place when the bottle exits out from the induction sealer. The process forms an Airtight Seal. It is also noted that due to the Airtight Seal, the products freshness or aroma is maintained in the container increasing the products packaged shelf life and hence gaining consumer confidence.

Is Induction Seal a Strong Seal?

Yes! This is indeed a strong seal when sealed with the right induction sealing equipment. This works on the principle of understanding what is the parameter of the induction seal such as foil thickness, sealing layer thickness, application, product nature, etc.. We, at Arshad Electronics understand these parameters and provide the FLUXOSEALER, our range of induction cap sealers that seal containers making them airtight and have a strong seal.

We also encourage our clients to conduct a drop test and a check of seal strength. This strength of seal is very important as mostly considering the transportation methods used today in India that may face accidental fall of bottles/boxes, bumpy roads, improper handling, etc.. This is vital as if a product leaks, the entire batch has to be recalled incurring additional transportation and handling charges resulting in substantial losses.

Why is Induction Sealing a better choice?

The induction seal provides contact uniformly on the mouth of the container thus providing 100% seal. This eliminates product recall costs due to leakages in containers. Also it provides safety and air tight sealing to users of bottled pesticides and chemicals while handling and before usage.

An induction sealed container discourages a pilferer and makes the product a less likely target.

After the induction sealing process, the induction foil will show evidence that the product has been tampered with or any other substances has entered into the container during post packaging processes.

The user sees the seal’s integrity and feels secure that the product is unadulterated and fresh. This enhances customer confidence in the product.

There are a few basic facts we need to know about induction cap sealing and that is the factors that are vital to the sealing process. These factors are:

Many induction wads have different types of layers for basic and special applications. These layers contain an aluminum foil that is vital as this is the medium of heat transfer from the sealer to the poly-laminate sealing film. There are various range of gsm of the foil available in the market. However, We recommened 20 – 35 gsm. Foils below this range require less heating but must also have a low temperature heat sealable layer and used for high sealing speeds with a smaller neck diameter.

To achieve a perfect and uniform sealing, the plane surface of the mouth of the container must be uniform and smooth. This will ensure that when the induction seal lands on the mouth surface, it lands with uniform contact to the mouth. Thus resulting in 100% perfect seal.

This is the amount of pressure needed to be applied by the cap to the bottle in order to make sure the foil is perfectly landed on the bottle mouth, thus assisting the sealing process.

What can be Induction Sealed?

List of Type of Containers that can be Induction Sealed: 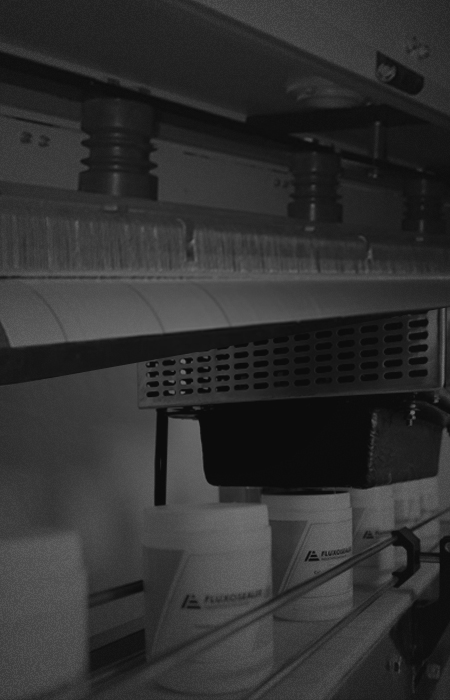